It has been globally a tricky day today, with several breaks as you can see in the Live report below, due to changing wind at the landing zone. Pretty cold at launch, long waiting for several pilots.

Results after Run 2 solo are available on this page. 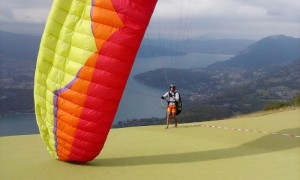 Some comments from pilots flying earlier in the day:

Linda Kits, Sweden: “I’m finding it tough – the level of competition is very high and I feel very much the beginner.  But I’m going to keep going!”

Guri Storeide, Norway: “I enjoyed myself today, but the landing was not so good!  It was nice to do a restricted round (manoeuvres up to 1.90 coefficient) as these are my best ones.”

Lea Hansenberger, Switzerland: “I just loved it today.  The landing went a bit wrong though.  I tried to spin out of the ground spiral, but I turned the wrong way!”

Christina Kolb, Austria: “It was a good run, but the landing could have been better – which is normal for me!”

Nicole Schmidt, Germany: “It was stressful waiting on launch for conditions to improve.  In fact, it looked worse than it was.  But I landed on the raft today, which was a good result!”

Raoul Rodriguez, Spain: “Very happy after today’s run, it went well, especially given the strong wind.  And the landing was better than usual!”

Felix Rodgriguez, Spain: “A good run!  I played it safe, with not so many twisted manoeuvres, and of course, it was restricted, so nothing too complicated.”