In background, you can watch the video summary of 2014 french paragliding aerobatics championships. It is best watching it below with original music. You will love it!

Special thanks of the Organization Committee :

Special thanks to Pierre-Emilio Medina of Goupil Studio for beautiful videos of the french aerobatic paragliding championships 2014 and 2015, and for the photos he has generously shared and that you will find in almost every presentation pages of these world championships!

We are also happy that the making of the  teaser of these world championships was entrusted to him. 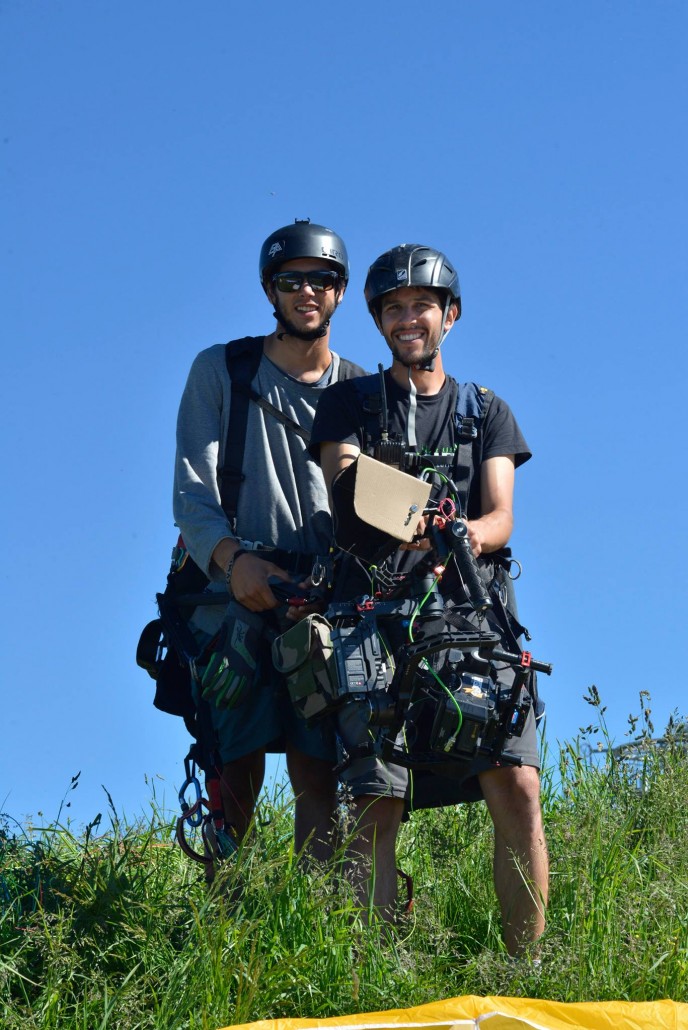 First of all, can you present yourself in a few words

I am Pierre-Emilio Medina, 26, I’ve been an independent videographer for the last 3 years. I’m lucky enough to have tasted outdoor sports, and I’ve skied, mountain biked and walked ever since I could stand upright!

What were the important steps in your learning videography?

My job is above all a passion for animated images that I have had since I was small. I made my first animated video with my LEGO, which I made ski in a cotton wool landscape! Chance then played an important role, and in 2010 I went to an audio-visual school, after having spent quite some time trying to find my path. I finished my apprenticeship with a very good internship in a company, and by learning by myself how to exploit the possibilities offered by a camera.

It’s Boris, my younger brother, who opened up the path into this little world of paragliding. One fine day he proudly introduced me to the young Eliot Nochez with who he shared great paragliding sessions. After a first edit of his acrobatics at Dune du Pilat, I made a speed riding video with him. And there I was, one foot in the universe of acrobatic paragliding!

Which videographers have inspired you?

I must say I enormously admire the work of Seb Montaz ever since his film “I Believe I Can Fly”, he knows how to capture very beautiful moments in air sports and how to present them to their advantage. I have also recently discovered the careful work of Shams with the film “Sounds of Paragliding” which innovates in paragliding videos by giving an important place to capturing sound. I also like to be inspired by the work of certain film directors such as Benoît Delépine and Gustave Kervern, or Jean-Pierre Jeunet.

What equipment do you use?

For filming I use a digital body, Panasonic GH4, which allows 4K filming, with a RODE mike and above all an electronic stabiliser DJI Ronin. Hanging under a tandem it lets you get images of great fluidity and stability. The “must have” is a 7-inch control screen which is linked to the camera so that I can see the film from my harness.

I can tell you about the adventure of my last paragliding shoot. We have been working with Eliot Nochez since the beginning of the year and for this summer he suggested a very fine project. End of July we left for 4 days filming his exploits with his acrobatic mates of all different styles. The shoot went smoothly and at the end of this short week we had “in the can” a very nice film ready to be edited. But there you are, we wanted even more, and we set off for Doussard to film a last bit of acrobatics. While we were at the take-off, ready to get this last image, we heard that our car had been broken into at the landing field and most of our video equipment had been stolen… including the hard disks containing all the images for the film…

After that it was very difficult to get back going, I had hardly any equipment to film properly and spirits were pretty low… But Eliot managed to remotivate the whole team, redo a week’s filming and succeed in capturing new images. The film is now in the process of being edited for an opening planned for September (I can’t say much more, but if you follow free flight news you’ll probably hear about it).

Do you have any tips or advice specifically for taking videos of paragliding acrobatics?

For me, the difficulty in filming paragliding is in the fact that the glider flies at different altitudes during its run, and often perched up high when you film from the ground. To properly understand a paragliding manoeuvre the best thing is to have a fixed visual reference in the image and to avoid having just a blue background. That’s why I try to film from a tandem which is very slightly below the acrobat, thus allowing a visual field with a bit of ground (the fixed reference) and the paraglider in the middle of the sky. On board cameras on the pilot also give very good results for visualising acrobatic manoeuvres.

What are your projects or ideas for 2016?

For the year 2016 Eliot is pouring out ideas and projects, enough to fill up my agenda; in parallel I’m going for a month and a half to Argentina to make a film of ski touring and mountaineering with my brother and some friends. I’m also involved in a clip making collective which I love working with, that lets me diversify my shoots and meet people from different horizons.

I’m not going to go on further with this article because I’ve got work to do: editing Eliot’s videos as well as capturing these fabulous World Championships of Paragliding Acrobatics. See Ya!

and to see my musical creations, here:

2016 official teaser of this year world championships, then videos of 2015 and 2014 french championships in Annecy – Enjoy!